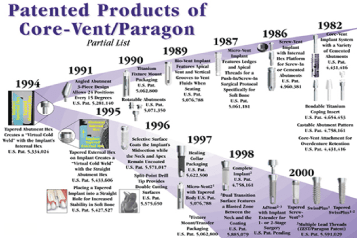 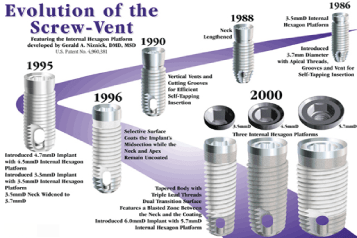 In 1982, Dr. Niznick, established Core-Vent Corporation to market the Core-Vent implant, a hollow basket design with external threads. The implant body was provided in three diameters, 3.5mm, 4.5mm, and 5.5mm, and featured three threads that projected out from the implant body an additional 0.8mm. The implant was made of medical grade titanium alloy with an aluminous oxide grit-blasted surface. It featured an internal hexagon, a non-threaded shaft that was used to insert the implant, then served as a receptacle for a variety of cemented abutments. The wide-diameter Core-Vents predated wide-diameter implants from other major manufacturers by 10 years and made Core-Vent well suited for immediate placement in extraction sockets. The Core-Vent System was the first to offer a variety of abutment options including the Core-Vent Attachment and the first to use free-standing implants for over-denture retention (Niznick GA: J Oral Implantol 1982;10[3]:2-39).

In 1986, Dr. Niznick launched the Screw-Vent Implant with a 3.7mmD straight body matching the body design and dimensions of the Branemark external hex implant. This straight Screw-Vent is still sold by Zimmer Biomet 33 years later. It introduced the internal hex/thread connection with a lead-in bevel. This design became the cornerstone of modern dental implant design. It has been copied exactly with its 45-degree bevel by many systems and modified with a steeper bevel (76-81 degrees) by others, together known as the conical connection. (US Patent #4960,381). In 1987, Dr. Niznick introduced the 3.25mm diameter Micro-Vent® implant (Niznick US Patent #5,061,181). The Micro-Vent featured a series of ledges for bone ingrowth and three apical threads. This design provides a unique push-in/screw-in surgical protocol for use in the porous maxillary bone. The Micro-Vent was the first commercially available HA-coated implant with threads. In 1988 Dr. Niznick also introduced the Bio-Vent, HA-coated cylinder implant with vertical grooves connecting to apical vents. (Niznick US Patent # 5,076,788) This design facilitated seating and allowed bone ingrowth into the vertical grooves to prevent rotation.

In 1987, Dr. Niznick introduced the 3.25mm diameter Micro-Vent® implant (Niznick US Patent #5,061,181). The Micro-Vent featured a series of ledges for bone ingrowth and three apical threads. This design provides a unique push-in/screw-in surgical protocol for use in the porous maxillary bone. The Micro-Vent was the first commercially available HA-coated implant with threads. In 1988 Dr. Niznick also introduced the Bio-Vent, HA-coated cylinder implant with vertical grooves connecting to apical vents. (Niznick US Patent # 5,076,788) This design facilitated seating and allowed bone ingrowth into the vertical grooves to prevent rotation.

In 1990, the Core-Vent, Screw-Vent, Micro-Vent, and Bio-Vent implants all featured the internal hexagon/thread conical connection and were packaged in a patented sterile delivery system suspended on a titanium carrier (Niznick US Patents #5,062,800) The philosophies of all four implant designs were synthesized into a protocol for implant selection based on bone quality and location, and the implants were relaunched as the Spectra-System®.

In 1991, the U.S. Department of Veterans Affairs launched a prospective, multi-center study, funded by Dr. Niznick, to determine the influence of implant design and bone location on implant success. The Spectra-System was selected for the study, due to its various design, material and surface options. The V.A. study comprised more than 900 patients and over 100 investigators at 30 V.A. medical centers and two university dental schools. A total of 2795 Spectra-System implants were placed. The results of this study were first published in a special issue of the Journal of Oral Maxillo Facial Surgery entitled Clinical factors of Importance to Successful Implant Therapy (Vol. 55, Number 12 Supplement 5, December 1997). The three-year results were summarized in a 1998 article comparing a number of parameters including implant surfaces and designs, surgeons’ experience, pre-operative antibiotic therapy, and patients’ overall health. (Morris H. and Shigeru O.: Hydroxyapatite-Coated Implants: A Case for Their Use. J Oral Maxillofac Surg 56:1303-1311, 1998.) Based on the results of the V.A. study, the Screw-Vent and Core-Vent acid-etched surfaces were modified to create texture by blasting with HA particles, referred to as SBM (Soluble Blast Media).

From May of 1991 to April of 1997, Dr. Niznick licensed Dentsply International as the sole distributor of Core-Vent Corporation's products, which were continuously developed and manufactured by Dr. Niznick through his company, Core-Vent Bio-Engineering. In 1992, Dr. Niznick developed the friction-fit connection between the abutment and internal hex implant by tapering the male hex of the abutment. (Patent #5,334,024). In 1993 he further patented a friction-fit connection for an external hex implant. (Patent #5,433,6060). The advantages of these friction-fit connections were evaluated in an article by Paul P. Binon: The Evolution and Evaluation of Two Interference-Fit Implant Interfaces. Published in Postgraduate Dentistry 1996.

In 1997, Dr. Niznick reassumed control of the distribution of Core-Vent's product line from Dentsply and marketed Core-Vent products under the name Paragon Implant Company. Paragon Implant Company introduced the Paragon implant, which was a Screw-Vent with Healing Collar Packaging (Patent #6,287,117). Two decades later, NobelBiocare reintroduced this concept of a healing collar becoming the trans-mucosal part of the abutment in what NobelBiocare calls it’s “On1 system”. In 1999, Dr. Niznick introduced the tapered AdVent one-stage implant and the tapered Screw-Vent implant, both with triple lead threads for faster insertion. The AdVent platform was designed for use as a multi-unit abutment for screw-retained restorations. In 1995, Dr. Niznick, patented a surgical protocol for inserting a tapered implant into an undersized socket for increased stability (Patent #5,427,527). The Screw-Vent tapered body with triple-lead threads further simplifies insertion and increases initial stability in soft bone by using such a surgical protocol, inserting the tapered implant into an undersized socket prepared with straight step-drills . (Niznick GA: Achieving Osseointegration in Soft Bone: Journal of Canadian Oral Health.) The Tapered Screw-Vent’s triple lead threads allowed insertion as fast and easy as the push-in BioVent and the push-in/screw-in Micro-Vent, obsoleting these two HA-coated implants by 2001 because the fully threaded body of the Tapered Screw-Vent provided greater initial stability essential for an immediate load.

At the end of 2000, Dr. Niznick sold Core-Vent/Paragon to Calcitek which, through several subsequent acquisitions, became Zimmer Biomet Implant Company. 33 years after first introduced Zimmer Biomet still sells the straight Screw-Vent with the Tapered Advent and Screw-Vent implant’s being among it’s flagship products.

In 2004 Zimmer Dental’s lease expired on Dr. Niznick’s Los Angeles factory and they consolidated their manufacturing operations in San Diego. Dr. Niznick started Implant Direct, occupying his original Core-Vent Engineering building and hiring 90 of his former employees. Implant Direct launched its innovative product line in October 2006. Dr. Niznick’s experienced team set up the industry’s only lights-out 24/7 manufacturing of dental implants which allowed Implant Direct to reduce the costs of manufacture high quality, innovative products as explained by Dr. Niznick in this 1998 Factory Tour video. Many industry reports were written on how Implant Direct was able to create the “Value Segment of the Implant Industry" through its low costs and all-in-1 packaging.